by James McArthur & The Head Gardeners 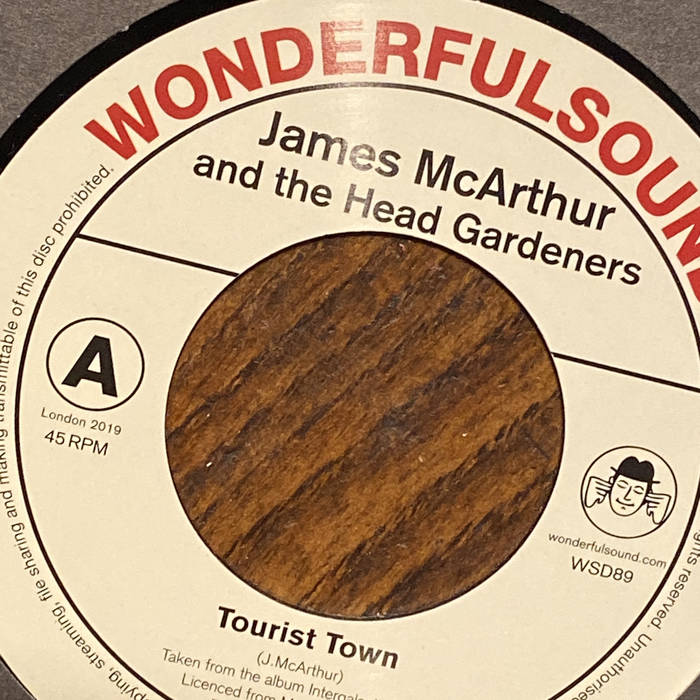 AA Side of the only physical version of tracks taken from James's new LP Intergalactic Sailor:

Featuring guest appearances from brothers Joel and Liam, of Noel Gallagher and Paul Weller-collaborators Syd Arthur, it follows McArthur’s previous album Burnt Moth, which was released to critical acclaim in 2017.

“I received a call out of the blue from Joel Magill (Syd Arthur) inviting me over to East Wickham Farm to do some recording. As it happened, me and The Head Gardeners were ready to roll, and spent 15 days with Joel putting Intergalactic Sailor together. I played some drum loops to start with, then we sonically painted in all the parts...

I'd always wanted to work with Liam Magill, (brother of Joel, with whom we had already worked on previous Head Gardeners albums with) we had played on the same bills in Canterbury and London over the years, but never worked in the studio together. Liam came down to their place - Wicker Studios - we had a productive session and he ended up on quite a few songs. Luckily for me, Liam & Joel (who played bass throughout the album) are natural 'Head Gardeners'.”

The remainder of the album was recorded at East Wickham Farm, the nearly 400-year-old building bordering Kent and South-East London that was the childhood home of Kate Bush and is still owned by the family today.

Intergalactic Sailor demonstrates McArthur’s, now signature, intricate plucked guitar lines and hushed vocals that are beautifully accompanied with yearning violin from Jim Willis and haunting pedal steel guitar from Johnny ‘O, who make up The Head Gardeners. Throughout his career, McArthur has valued the overall listening experience. From performances alongside ambient DJs at the Tate Modern, to live shows on the top of a mountain, to miniscule gigs in a vintage golden caravan, his devotion to creating the perfect atmosphere is key to the beautifully intimate feel in his music.

McArthur cites inspiration for the new album from road trips around Sardinia and mainland Italy, visits back home to Wales, the re-working of a Suffolk coastal garden, and all the experiences of central London living in-between. The lyrical themes of Intergalactic Sailor range from financial loopholes to astronomical black holes, though McArthur always retains his connection to the natural world, particularly on tracks like “Drain The River”, and “Clearing Up” that focus in on our relationship with the environment. Integrating nature and nurture, McArthur invites you to interact with the living landscape, unite and connect with each other and, consider our place in the world, all with his own subtle charm.

In collaboration with label Wonderfulsound, a double A side 7” vinyl of tracks “Tourist Town” and “Plane Sailors”, which McArthur describes as being about “forest fires, climate change, and community”, will be released as part of their bi-monthly singles club Wonderfulsevens as well as a commercial release.

“A Beta Band-like roots rondo with jazzy touches that a modern-day Pentangle might pilfer.” - Classic Rock

“As close as we'll get to a modern-day Heron.” - Record Collector

“His sound is immersive and bubble like, it felt like I was inside the music looking out.” - Jimmy Cauty (KLF, The Orb)

“James McArthur’s music is like his gardens: intricate, beautiful and a wonderful way to spend an afternoon.” - Jamie Morrison (Stereophonics)

Bandcamp Daily  your guide to the world of Bandcamp